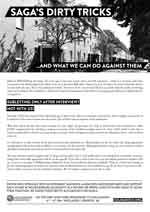 Rents in Wilhelmsburg are rising. Ten years ago, 6 euros per square meter was still customary – today it is 10 euros, and often even more in the Reiherstiegviertel. Many of us are in financial difficulties. Many of us face the threat of eviction from the district or even from the city. This is the political intention! The focus of the city-owned SAGA is on profit. And for profit, everything seems to be allowed. We would like to inform you about the harassment of the SAGA, its background and how we defend ourselves against it.

SUBLETTING ONLY AFTER INTERVIEW?
NOT WITH US!

Recently, SAGA has requested that subtenants get to know each other in a personal conversation. That is legally unnecessary! It is sufficient if the main tenants state the name, date of birth and occupation of the subtenants.

Why does SAGA do this? She wants to make sure the „right“ people move in. Only in March they were sentenced to 1,000 EURO compensation for rejecting a woman on account of her Turkish-sounding name. In court, SAGA made it clear that it wants to determine in which areas poor people or people with a foreign-sounding surname are allowed to move – and in which areas not.

It is obvious to us that eviction of the poor and racist discrimination are official policies of the city! After all, cheap apartments in Eppendorf will not be made available to us in return. On the contrary. Although demand is rising, we are seeing less and less affordable housing because almost all of it is being built for the better off.

We must defend ourselves against this! As long as living space has to yield profit and is not managed by us tenants, evictions, rising rents and moldy apartments will be on the agenda. If you don’t want to lose out, you can defend yourselves together with us. Come to a meeting of Wilhelmsburg Solidarisch if you have problems with your landlord. With us, a letter was enough to get the subletting approved without an interview. You can find the letter here. By the way: If you are not allowed to sublet, you may even be entitled to damages. We are happy to support you in this as well.