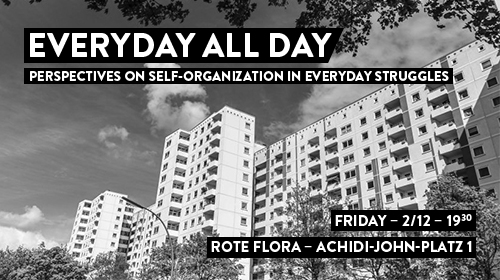 It’s Monday morning and the weekend is over. There’s the blues again – trouble at work, trouble with government agencies, trouble with the landlord. As strong as we feel at demonstrations or amongst our circle of friends, we often feel alone facing the troubles in everyday life. It seems to be the same for others, too: there’s the neighbour who seems to be nice but is always tired and harried from her job, or the friend who is facing a lawsuit for being unable to pay his bills. But more often than not, everybody is dealing with allegedly private, personal problems alone.

To counter this miserable condition with political action, for quite some time now some left-wing groups rely on self-organization in everyday struggles. Be it in their respective neighbourhoods or having a specific topic (e.g. renting and evictions or unemployment), people get together to exchange experiences and find solutions for the impositions of bureaucratic-capitalist normality. They organize themselves as those affected by the terror of labor, deportations or the craziness of government agencies. Bureaucracy is countered by clever joint political action, isolation with practical solidarity.

This open forum will discuss the current state and future perspectives of self-organization in everyday struggles in a (self-)critical way. We want to give some of the above mentioned groups an opportunity to talk about the questions that arise out of their political praxis: What strategic topics and problems are currently debated? When are the groups successful – and where do they fail? What do everyday struggles and self-organization have to do with the possibility of broader social transformation?

The following groups will be represented on the panel:
• BASTA! is counseling unemployed people and organize them for joint political action against „Jobcenters“.
• FAU Berlin successfully engages in grassroots union work.
• Oficina Precaria Berlin supports, counsels and organizes migrants facing problems with German government agencies and the German social system.
• Wilhelmsburg Solidarisch relies on self-organization and direct action where people are facing problems with landlords, government agencies and their bosses at work.

The event will be held in English. A simultaneous translation into German will be available.